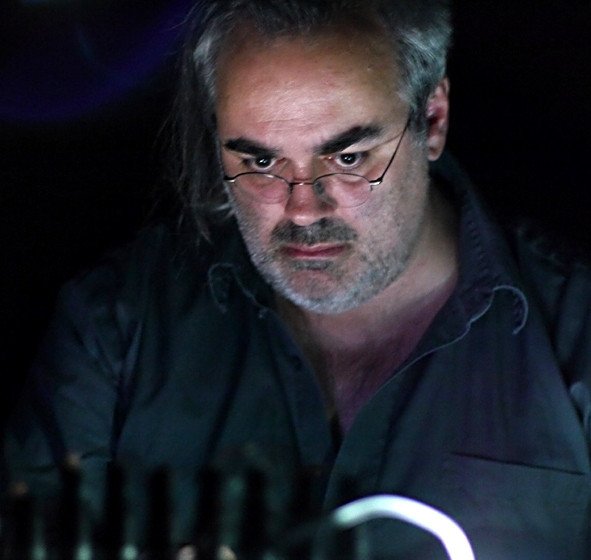 Frédéric Acquaviva, born in 1967, has been since 1990 a sound artist and experimental music composer, creating chronopolyphonic installations and CDs and playing in art galleries, in museums or in underground venues.

Staying away from traditional networks of musicians and composers, he meets and works with historical figures in art, poetry or video, sometimes a long time before their being discovered by the media. He has collaborated this way with Isidore Isou, Maurice Lemaître, Marcel Hanoun, Pierre Guyotat, Jean-Luc Parant, mezzo-soprano Loré Lixenberg, film maker F.J. Ossang and choreographer Maria Faustino, among others.

… I met Pauline and Ione when i was in composing residency with Loré Lixenberg at Emily Harvey Fondation in Venezia in December 2011.

In 2013 I printed with my editions Pauline's fantastic  Postcard Theatre (now out of print) but also my own Musique Cabalistique where Pauline stands as the first ideal listener on the affiche that I published from the 2012 performance in Venezia.

Pauli(o)ne, the film, was finaly edited in 2016 to be included in La Plaque Tournante's magazine CRU #2. I asked Pauline and Ione if I could film them while Pauline was composing in real time using Second Life. Although it is, as all my films, showing the act of creation, I sometimes think of it as a love movie. On 15 November, Pauline writes to me  ‘Love the film … Very special the way that you shot it’. Four days later she was choosing a still from the film to be her contribution for the 30 deluxe editions of CRU #2. On 25 November, I would send her the 30 photos, not knowing she passed away a few hours before.

I’m so sad she's gone. She was a truly special human being and an amazing artist ...